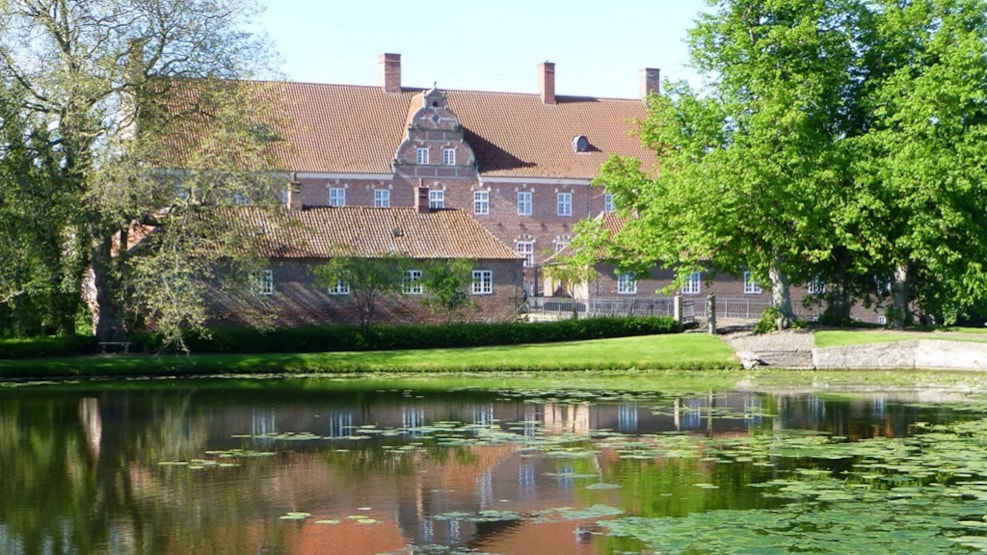 Gyldensteen Castle is an impressive sight with a magnificent Renaissance building and beautiful surroundings by the meadow and the forest.

Gyldensteen Castle is mentioned for the first time in 1409 under the name Enggaard (which means the meadow farm). The building is located by the beautiful meadow Ålebækeng, so it was an appropriate name. At that time, the castle was owned by the nobleman Niels Thomesen. Over time, the farm was owned by many different noble families, until the French nobleman Jean Henri Huguetan d'Odyck bought the estate in 1719.

He had made a lot of money in the European financial world, and the money and good connections throughout Europe helped make him popular at court. In 1720 he was given the title of count under the name Gyldensteen (golden stone) - reportedly because he could turn the bare stones into gold. He renamed Enggaard Gyldensteen, and the castle has been in the family's possession ever since. Over time, much land has been sold off, e.g. Gyldensteen Strand, which has become a nature reserve. The estate still has a large farm with a large production of onions and pumpkins.

The main wing of the castle was built in 1640 by the nobleman Gregers Krabbe. The castle is built in the Renaissance style on a rampart with deep moats, and around the year 1700 the low angular side wings were added. Around the year 1800, the two side wings were connected to the main building via two buildings that are slightly higher than the side wings. The castle has been restored several times. The castle is surrounded by a large garden that was originally laid out in Baroque style and today is in a landscape style with beautiful, tall trees.

Gregers Krabbe also built a barn in the Renaissance style, but it burned down in 1960, and today only the west side from 1636 and a newer eastern side from 1724 remain.

The castle is not open to the public and you can only see it from the road. Please note that there is no public access to the garden.