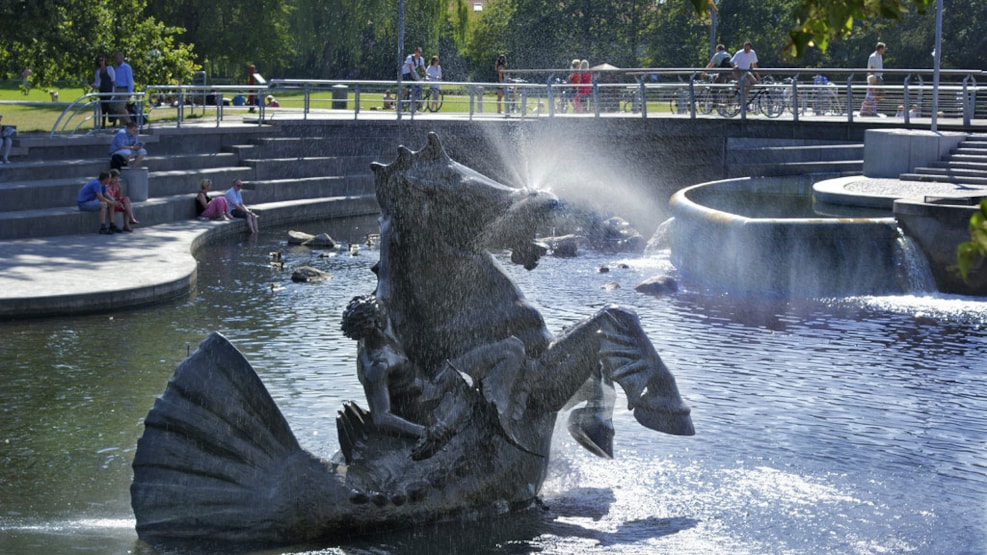 At the entrance to Munke Mose, it is impossible to miss this powerful, snorting fable animal with a mermaid on its back.

Agnete’s Lullaby (the inspiration for this sculpture) is part of one of Hans Christian Andersen's more dramatic poems, "Agnete and the Merman". The author had tremendously high hopes for the poem and later rewrote it for the stage. The poem and play had a short and turbulent life that never really met his expectations.

The sculpture in Munkemose has, however, had 'a place in the sun' since 1939. This work of art shows a wild sea horse with a mermaid on its back, who rears energetically in the water, just like in the poem.

Originally, Liisberg worked on a smaller sculpture, as it was supposed to be placed at the outdoor public pool on the outskirts of the city. However, the City Beautification Committee decided that such a beautiful piece had to be placed in the city centre, hence the prime location in the favourite local park. The sculpture is made in bronze.

The Danish sculptor Carl Hugo Liisberg started out as an apprentice at the Royal Porcelain Factory in 1913-15 and later studied with Antoine Bourdelle in Paris in 1920. He primarily made animal sculptures in glazed stoneware. He is known for his realistic and dynamic design language.