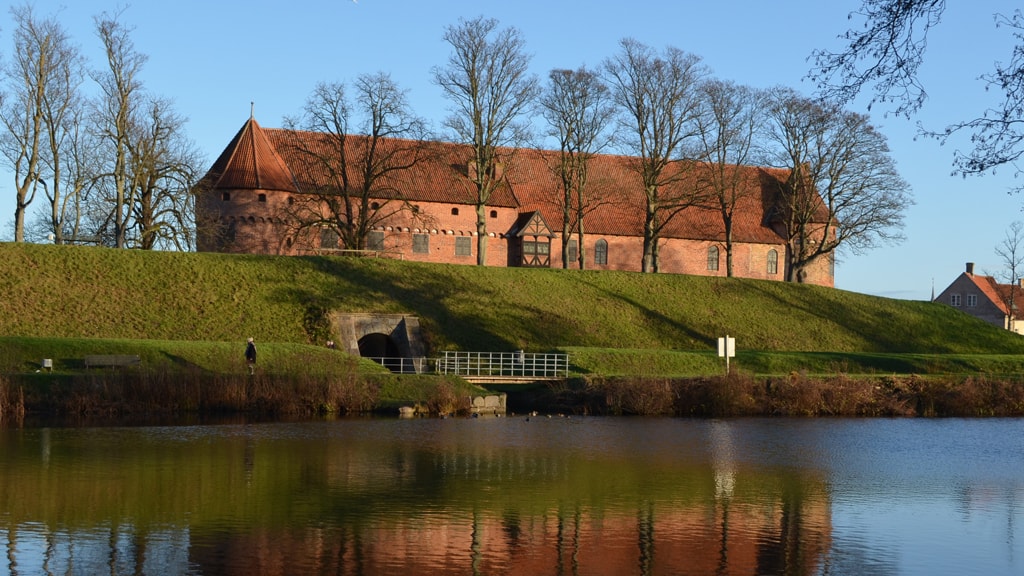 19 The Castle in Nyborg

According to later sources, Nyborg Castle was founded in the 1170s by Knud Prislavsen, the nephew of King Valdemar I of Denmark. By 1193 at the latest, when the oldest source mentions Nyborg Castle directly, it had been passed to the Crown. Many years of archaeological excavations on the castle islet have unearthed a lot of new information about the castle. It is difficult to say whether the oldest castle was replaced or extended, but by 1193, major construction work was initiated. We now know that the castle was built in one go, with ten-metre-high ring walls and two large stone building surrounded by moats. The water was channelled to Nyborg from the River Vindinge Å, around 5 kilometres from the town through a large-scale canal and dyke system that ensures that there is water in the moats around the castle and the town to this day. The castle was part of a larger project where large new fortresses and fortifications were established throughout the kingdom as part of the strengthening of the royal power after decades of a mutual battle for power in Denmark when Valdemar became the sole king in 1157. It served both as protection against inner rivals for the kingship and against external enemies such as the pagan Wends, a common name for the Slavic peoples that inhabited the southern shores of the Baltic Sea. Together with the castle on the island of Sprogø and Tårnborg near Korsør, Nyborg Castle controlled both the crossing of and sailing through the Great Belt. With other strategically important castles such as Kalundborg and Vordingborg, the great royal castles by the coast also served as staging points for the Danish crusades in the Baltic Sea in the 12th and 13th centuries. It was a state-of-the-art castle with ring walls of a height of just under ten metres with semi-circular towers on the long sides, which can still be seen in the preserved building facing the mound.

The two large palladium buildings were built up along the ring wall. There was also a tall, extremely solid castle tower in the corner of the tournament square. The fact that Nyborg Castle was built on the scale that it was suggests it was built with a clear purpose in mind. The preserved royal wing, the west wing, formed the setting for the Danish parliament in the Middle Ages and is the closest we get to a medieval Christiansborg, the seat of the Danish Parliament today. The original building was two storeys high and approximately 28 metres long. It is part of the preserved royal wing, where, opening onto the courtyard, you can see an arched door and a bricked-up arched window from this period. In around 1300, Erik Menved (1287–1319) had the very large, tall watchtower built, the bottom of which can still be seen. It was probably 36 metres high and may have replaced the earlier castle tower. The royal wing was extended in the 1300s – probably during the reign of Margrethe I (1376–1412) – when it was extended to the south and a storey was added at the same time that Nyborg’s Church of Our Lady was built. A large new great hall was built on the new floor. The fortifications around the castle were reinforced in the 1430s, and in the last few decades of the 15th century, it became a more permanent residence for the Danish King Hans (1481– 1513). The royal mausoleum was located in Odense, and in 1525, Nyborg was officially chosen as Denmark’s first actual capital by the Danish Council of the State.

Extensive modernisation transformed the medieval fortress into a Renaissance castle. The horizontal divisions between the ground and first floors were lowered by some 60 centimetres, and strong girders inserted to support the beams. The windows were enlarged and topped with round arches, and several of the rooms were decorated with geometric patterns. To the ceilings in the upper storey were added robust beams, ending by the walls with carved corbels. During the reign of Christian III (1536– 1559), the castle underwent major changes as part of the transformation of Nyborg Castle and the town into a mirror of princes for the new protestant Crown. The royal wing was extended to the north and the new great hall was built with the private royal chambers above it. An external stair tower connected the floors, and wooden lintels were added to the windows. The new buildings were part of the staging of the royal power and the new faith. This lasted until 1560, when Frederik II (1559– 1588) moved to North Zealand. However, investment in both the castle and the town continued, but Nyborg Castle’s glory days were over.

In the war with the Swedes in the late 1650s Nyborg Castle, like the town, was occupied. It was at the time a large building with four wings. It suffered much damage during the occupation, and after the war and the introduction of absolute monarchy in 1660 the castle went into decline. Absolute monarchy brought with it the end of feudalism, and there was no longer any need for a residence in the castle for the local Crown vassal. The wings were demolished one by one until in 1873 only the west wing remained. This remnant was, however, thoroughly renovated by architect Mogens Clemmensen, who attempted to recreate the Medieval as well as the Renaissance castle.

The Castle Project
Nyborg Castle is in the process of being restored and rebuilt. The castle project is a unique project that will make the history and the preserved parts of Nyborg Castle accessible and tangible by recreating the outlines of the original construction and grounds. The project includes a thorough restoration of the original Royal Wing and the addition of a brand-new exhibition wing, a ring wall, a new bridge connection to the castle and, not least, elevation of the great tower – the Watchtower – to 22 metres.

The castle project will ensure access to one of the most important cultural heritage monuments from Denmark’s Middle Ages and the Renaissance. At the same time, the history and the entire original construction and grounds will be highlighted and made visually accessible to all visitors, and thus instantly comprehensible.

The Fortifications
The history of Nyborg’s fortress dates right back to the 13th century. As early as the Late Middle Ages the area around the church is known to have been encompassed by a moat and possibly by a rampart. The moat has been deduced from several excavations, but is in fact also discernable in the streets of today (see the section on “The Town Wall”). In the 1550s Christian III replaced the antiquated medieval fortress with a new and larger one. Its dimensions were roughly those that exist today, but there was no rampart west of the castle. There were large, threequarter-round earthworks on each corner. The fortress was modernised several times – by the Swedes, amongst others, in 1658-59. The really big reconstruction, however, was that of the Dutchman, Henrik Rüse’s, in the 1660s, when the large square bastions, the Embankment and the “White Virgin” (see below) were built. A rampart was then raised west of the castle across the Ladegård Lake. To do this, the lake had to be drained – an enormous task, considering that excavating machines did not exist.

The problem remained as to how to defend the town against an enemy coming from the hills to the west, so the fortress was again strengthened in the 1720s – although no satisfactory solution was found. The fortifications were closed down in 1869 and listed in 1918. Some of the installations were already gone, but most of them fortunately remained. Many of the demolished sections have now been restored with the help of a “Fortress Fund” which is responsible for the maintenance and restoration of the fortifications.