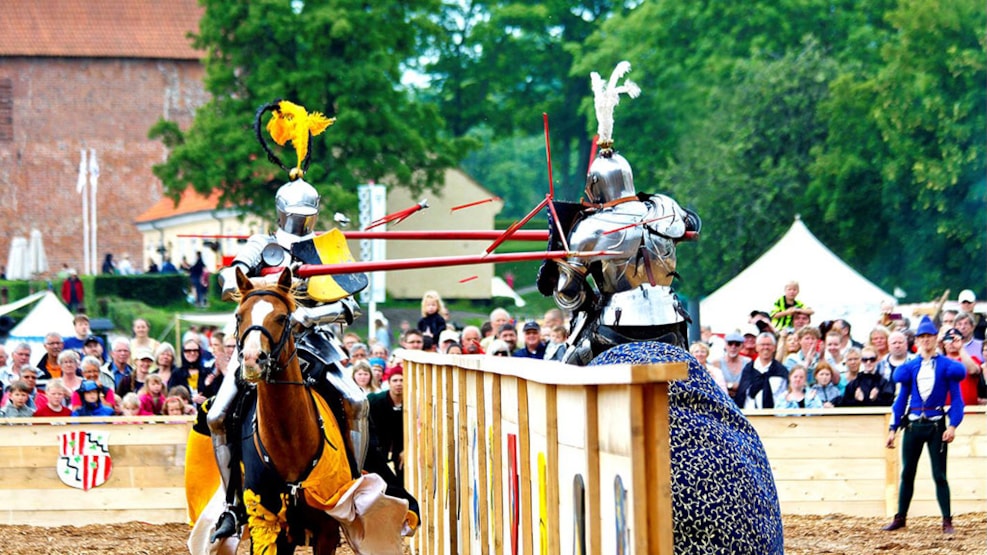 Danehof (the parliament of medieval times) in Nyborg, the heart of the Danish realm.

Danehof in Nyborg is a more than 600-year-old tradition, which makes Nyborg hum every year. There is a medieval tournament, stalls and tastings. There is entertainment for children as well as adults. And admission to most of it is free.

Danehof is the story of the parliament of medieval times. Valdemar Sejr founded Nyborg Castle around year 1200, and since then, it was often chosen as the meeting place for the Medieval parliament, the Danehof. When the Danehof took place, it lasted several days. Danehof existed for around 200 years, thus several kings participated during that period of time. In fact, Denmark’s Kings and Queen also gathered the entire aristocracy and the church for the legislative assembly in Nyborg, Denmark’s first capital, at Nyborg Castle, the King’s residence.

Nyborg Castle has three great halls, or Danehof halls, each from its own era of medieval times. They are, however, all authentic meeting places for Denmark’s most powerful and influential men of medieval times. You can still experience these rooms today; be where Håndfæstningen 1282 (the written promises a King would have to make to be elected) was passed and where Denmark’s last king killer was convicted in 1287 (the murder of Erik Klipping in Finderup Barn in 1286). In brief, you can still feel the presence of history and walk in the footsteps of kings and one queen in Nyborg.

The Medieval tournament in Nyborg.

At the Danehof market in Nyborg, the medieval tournament is held at the town square where lances are shattered against shields while horses at full gallop whirl sawdust into the air. The sun is high in the sky and makes the polished armour shine beautifully. Along the tournament arena spectators sit and stand with you, enjoying this authentic experience, which takes place on the original tournament arena from the 1500s. The tournament arena is the only original, preserved arena in the Nordic countries that is once again used for the purpose the King had intended – spectacular medieval tournaments.

Kongens Fadebur is a network of food manufacturers from the then Nyborg Len on Eastern Funen. The produce is local, grown and processed with attention to quality and authenticity. The products for Kongens Fadebur get their inspiration from medieval times. They also tell the story of how the local farmers supplied abundant amounts of produce when the King gathered his court and aristocracy for, among other things, Danehof in Nyborg.

The cozy and narrow shopping streets hum with activity. You can hear it sizzle from restaurants, cafés and stalls and the smell of delicious food inspired by both medieval and modern times fills the air.

Shopping is an important part of an authentic market and Danehof does not only take place in the town square where the medieval tournament is. Danehof is all of Nyborg’s medieval market and it takes place in the historic city center from Vor Frue Church in the east to Nyborg Castle in the west. So the entire royal facility plays a part when you walk the cozy streets. Many of Nyborg’s stores are open longer than usual and there are great offers to be found. As one of Denmark’s oldest market towns, Nyborg is always worth a visit when you want to do some shopping. As Nyborg is located centrally in Denmark, close to both highways, the railway and the marina, it is easy to get here and make a great deal.

It is not only the most powerful men and women who gather in Nyborg for Danehof. Danehof was and is for everybody. In medieval times, the population multiplied within Nyborg and the surrounding area as well as on the many manors in the beautiful countryside on Funen. This is also true for the modern Danehof where citizens and shopkeepers greet visitors and bring to life authentic history. Every year, thousands of knights, performers, musicians, volunteers and visitors gather within the ramparts to celebrate the history and make it come to life. A new king and queen always leads the way in the large, festive processions, and in 2022 it was Erik Klipping's turn. It was Eric who signed the first Danish constitution, Håndfæstningen, during Danehof in 1282.

Welcome to Nyborg, the heart of the Danish realm.