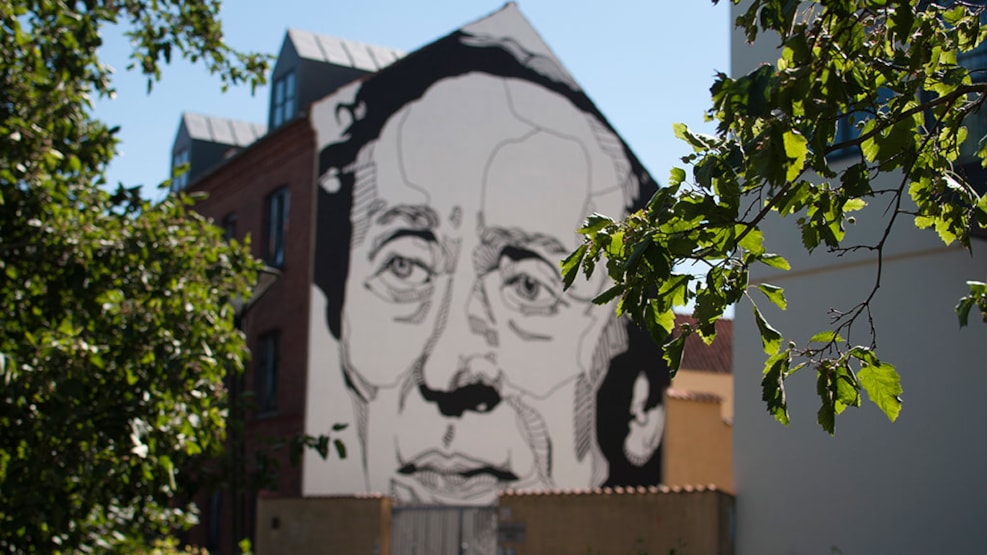 In the Footstep of Hans Christian Andersen

We invite you to take a stroll through the heart of old Odense, Hans Christian Andersen’s birthplace, where you can encounter numerous things to remind you of Denmark’s world-famous writer of fairy tales.
Starting from the City Hall (Rådhuset), walk down Vestergade and turn right into Jernbanegade. Here, you will find the Franciscan monastery (Gråbrødre Kloster), in the garden of which the writer often played as a child. The sculpture in the garden depicts Christian III.

Right after that you pass the former Funen Art Gallery (Fyns Kunstmuseum). Odense Theatre is your next stop. Behind the theatre you will find The King’s Garden (Kongens Have) and Odense Castle, where former kings stayed when in Odense. Hans Christian Andersen’s mother worked for a while at the castle and, as a boy, Hans Christian Andersen played in the castle gardens with the crown prince, later Frederik VII. The castle is not open to the public.

Turn right after the castle, passing through an archway, which also serves as an entrance to St. Hans Church, where the writer was baptized on Easter Monday, 1805. The Church is also well known for its medieval outside pulpit. It is visible as an open hatch in the outer wall of the church.

Now turn right along Nørregade until you come to Oluf Bagers Gaard, an old merchant’s house from 1586. Then cross Thomas B. Thriges Gade and enter the peaceful Hans Christian Andersen precinct, where you will find the house in which the writer is said to have been born on April 2. 1805. The building now houses the Hans Christian Andersen Museum.
Now cross the length of the old market square of Sortebrødre Torv. Turn right into Hans Mules Gade, following Overgade. Here lies Møntergården, the museum of cultural and urban history, whose large collection illustrates the city’s development from the time of the Vikings, through the medieval period and up to the present day.

A bit further along Overgade lies Påskestræde, where the writer once attended the charity school. Follow the narrow street down to Odense River. Here is one of the places where women used to do their laundry in Hans Christian Andersen’s days. Turn right and follow the path along the river past “Det Adelige Jomfrukloster”. Right after that you arrive at the Fairytale Garden (Eventyrhaven), where you will find a statue of the writer.