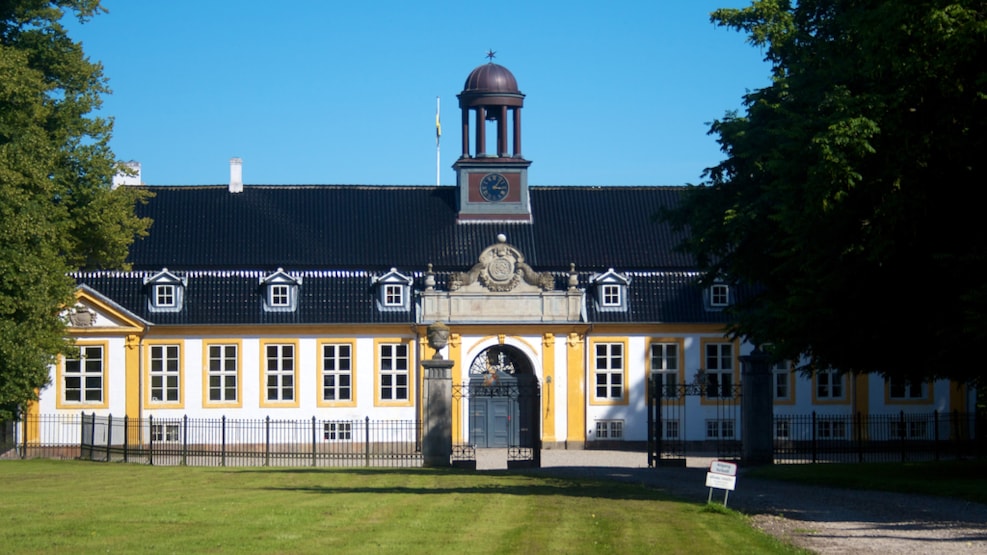 Glorup is one of Denmark's most interesting estates and is located approx. 10 km from Nyborg. It was built in the 1590s as a four-winged Renaissance farm, but was rebuilt in 1765 into a typical, small and elegant baroque castle of that period.

Moltke was proud of his new property when he bought Glorup Estate in 1762, but the house was already old-fashioned. Therefore. he hired the leading architect of the time, N.H. Jardin, and his building designer Christian Josef Zuber and let them inspect Glorup with the intent to modernize the entire estate.

The four low wings covered by the huge mansard roof with twigs remained largely unchanged. The west façade of the inner courtyard had the three middle bays elevated by one floor and the main gate got a new superstructure decorated with a lantern. Written on the attic is an inscription stating that A.G. Moltke had the building renewed in 1765. The outside walls remained white, while window frames, cornices and relief columns were partly kept in yellow. There was a large free staircase leading up to the main entrance and in the north and south axes of the facility, stairs were placed.

H.C. Andersen came to Glorup estate frequently and wrote in a letter: "It is a stay just to my liking, the castle resembles an Italian style castle and the garden that of English parks." H. C. Andersen went on walks around the garden and was an enthusiastic spectator to the transformation of it.

The garden of Glorup estate is privately owned and therefore visitors should show consideration when visiting. The garden is open to visitors Thursday to Sunday between 10.00-16.00 from 1st of April to September 31.

The main buildings for Glorup estate and Rygård are surrounded by forests, which have previously been influenced by ideas about cultivating introduced tree species. Here you will find species such as larch, douglas and Norway spruce.

NOTE: Guests are kindly requested to follow the signs, use the designated paths and stay away from the property itself, which is closed for the public and only used for private living.