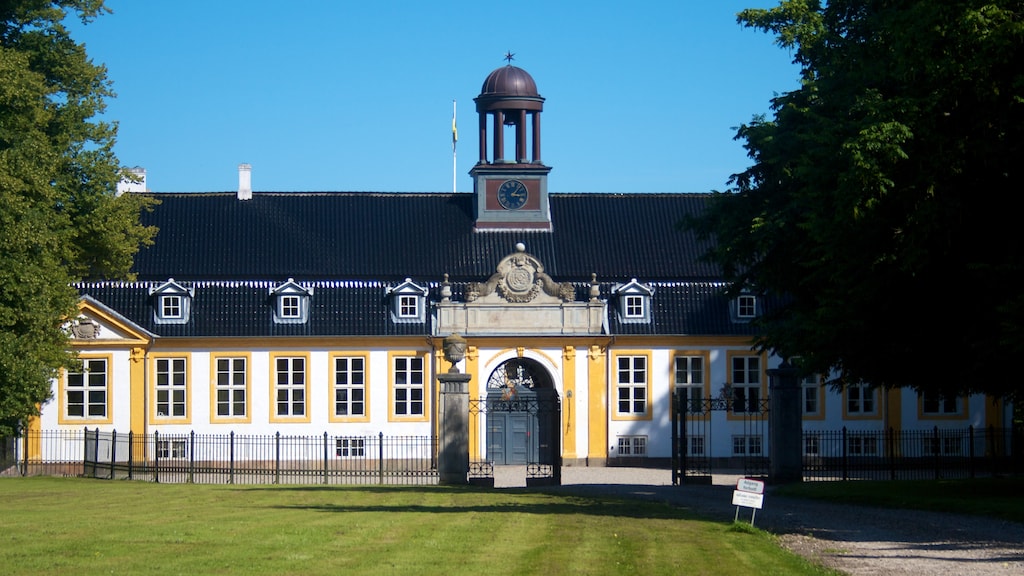 Glorup is one of the most interesting manors in Denmark. When built in the 1590s, it was a four-winged renaissance manor. In 1765 , however, it was converted into a typically elegang little baroque manor by the leading French architect of the time, Nicolas Henri Jardin. The manor house has low, white-limed wings with yellow cornices and a striking mansard roof with glazed blue-black roof tiles.

The garden os one of the first romantic gardens in Denmark, a socalled Anglo Chinese garden, framed by two wide parallel lime avenues, leading up to the manor house. Oaks, fruit trees and exotic plants create neat, regular patterns in the park. Winding paths lead to pavillons, stone vases, statues and to a glistening pond with a manmad island.

The Cultural Canon for Architecture of the Danish Mimistry of Culture has singled out Glorup Slot ad its gardens as an outstanding example of exquisit and sophisticated architecture and landscape gardening From the 1840's to the 1860's, Hans Christian Andersen was a regular guest at Glorup, where he even had his own room. In total, he spent over a year at the manor where he also wrote some of his famous poetry.

The woodland at Glorup

The main building of Glorup Manor and Rygård are surrounded by woodland which was previously influenced by ideas of cultivating imported tree species. You can still find old larches, Douglas firs and silver firs.

For permission to carry out various activities, such as riding, running, tree climbing, special use of the park, etc., please contact Glorup at glorup@mail.tele.dk

Go for a walk through the atmospheric park and continue through the manor landscape to the small main building of Rygård manor, which is the epitome of a romantic castle. Walk back to Glorup via a marked walk through the "Gammel Dyrehave" woods.

The manor park of Glorup is open to visitors during the day.