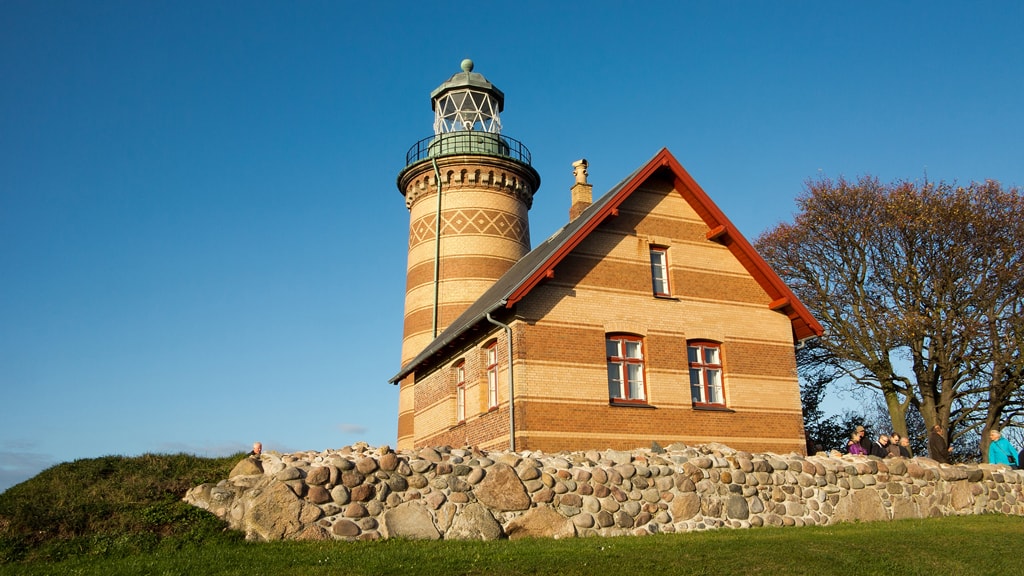 Sprogø: Girls’ Home, Valdemar’s Castle, nature and traffic in the middle of the Great Belt

Sprogø and all the wonderful experiences that wait for you here are not normally available to the public. However, VisitNyborg arranges guided bus tours to Sprogø several times a year.

You can read more about the many experiences on Sprogø here and also book your place on one of the tours.

The traffic on Sprogø

In the Viking period and Early Middle Ages, the fortresses at Nyborg, on Sprogø and in Korsør were part of one of Denmark’s most important defensive works. Over time, this developed into one of the Danish kingdom’s most significant east-west thoroughfares. Here, everyone who travelled across the country had to pass Sprogø and through Nyborg. This route is still the most important transport corridor in an east-west direction in Denmark and Sprogø, in the middle of the Great Belt, connects the bridges and tunnels of the Great Belt Fixed Link. The Great Belt fixed Link, which consists of a low bridge between Funen and Sprogø, together with a high bridge and a tunnel between Sprogø and Zealand is a record-breaking bridge. You can read more about the record-breaking bridge connection here.

The nature on Sprogø

Apart from being an infrastructure hub over the last thousand years, Sprogø is also the home of unique nature. The Great Belt area is characterised by low rainfall and relatively many hours of sunshine. At the same time, Sprogø has always been somewhat isolated, which has provided good conditions for flora and fauna. Up to around 40,000 birds could stop at Sprogø on one day. Sprogø is also known for its population of European green toads and Gl Sprogø is therefore fenced in to protect the toads from the motorway traffic. Apart from the rich fauna, more than 300 different species of plants can be found on Sprogø, which today is 154 hectares in size. Despite the fact that the island was expanded to around four times its original size in connection with the construction of the bridge, a year after its expansion in the 90s, there were already 50 plant species from Gl. Sprogø that now thrived on Ny Sprogø. You can read more about the nature on Sprogø here.

Valdemar’s castles on Sprogø and in Nyborg, the Heart of the Kingdom of Denmark

The nature on Sprogø has always been very unique. The weather has contributed to this. The weather has also been a reason why Sprogø has been a place for habitation over the last 1000 years. By 1160, Valdemar the Great had already established a castle on Sprogø, as well as fortifying Nyborg and Korsør. In this way he had control of the important north-south channel through the Great Belt and also controlled the vital east-west transport corridor in the kingdom of Denmark. With his fortification of Sprogø Valdemar – together with later kings and queens – also had a resting place when travelling around the kingdom and the weather turned bad. During the reigns of Queen Margaret I and later, amongst others, King Christian II, who was born at Nyborg Castle, Nyborg was expanded several times and by the end of the 15th century it became Denmark’s first capital – before Copenhagen. Nyborg, with its central placing, was the Heart of the Kingdom of Denmark. The capital at the centre of the kingdom, from where Denmark was ruled via the Danehofs at Nyborg Castle. You can read more about Valdemar’s Castle on Sprogø here or Nyborg, the Heart of the Kingdom of Denmark, here.

The lighthouse on Sprogø

The Girls’ Home on Sprogø

The Girls’ Home on Sprogø has in recent years become known due to Jussi Adler-Olsen’s book ”Journal nr. 64”. Part of the action in the romantic series about Department Q takes place on Sprogø and at the home for the ”morally defective” girls.

The Girls’ Home on Sprogø represents a particularly horrifying chapter in the history of the treatment of the less fortunate in Danish society. Up until 1961, the Girls’ Home was an institution where ”girls of easy virtue” were brought, in order to separate them from ”the decent” part of the population. The Sprogø’s girls’ home was not a prison. But how could they leave Sprogø, an island in the middle of the Great Belt? Neither was the girls’ home a hospital, but society wished to isolate these girls so that there immorality would not be transmitted to ”the healthy” population - especially the middle classes. For the approximately 40 years that the Girls’ Home operated, around 500 girls were placed in the institution. Their fates were decided and they were placed in a prison without bars for an unlimited period. In the book ”Letfærdig og Løsagtig”, you can read more about the Girls’ Home and who the many girls were, and you can also find out more about the Girls’ Home itself here.

Today, the Girls’ Home functions as a modern conference centre owned by A/S Storebælt. There is, therefore, not a great deal to see and on the Sprogø tours you are only allowed to view the Girls’ Home from an appropriate distance.