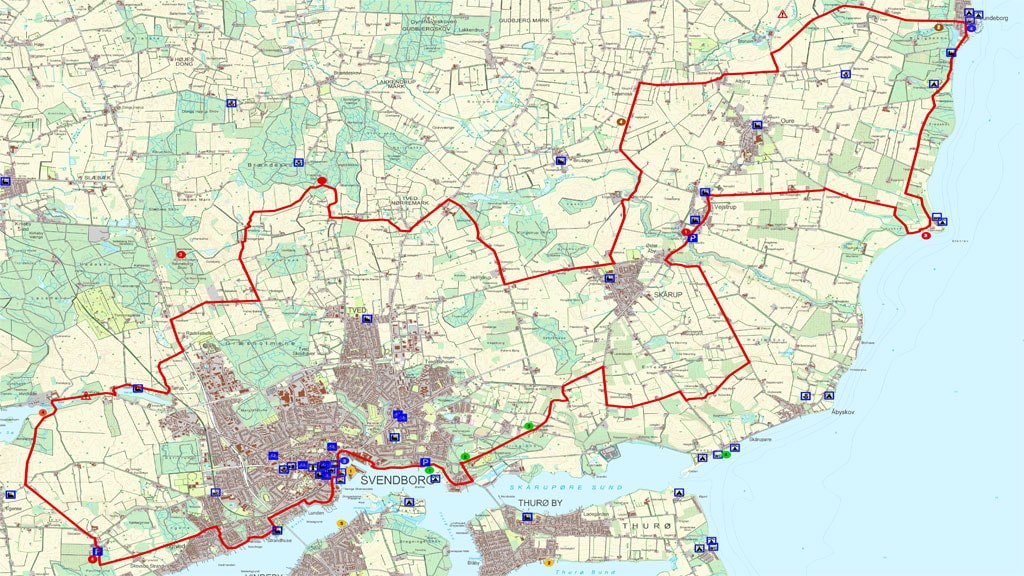 A string of eye openers

The south of Funen is known for its forests and beaches, pleasant fishing hamlets, romantic villages and exquisite manor houses. This route takes you through it all. Like pearls on a string the eyeopeners on this route will give you new experiences for your diary. Small wonder that in Denmark there is a stock phrase: ‘Fyn er fin’ – meaning ‘Funen is fine’.

Stop by at the Vejstrup Å water mill, where local grain was milled from the 16th century until 1975. The present Vejstrup water mill was built in 1838 and today is a museum mill that is open to the public. The water mill stands in a subglacial stream trench created during the last Ice Age. On the other side of the road you can follow a hiking path through Vejstrup Ådal which will take you along the stream among tall trees and chirping birds – while you are wondering what the place was like when several hundred metres of ice covered it all.


Many anglers flock to the coastal point called Elsehoved. So do many cyclists. They all enjoy the great sea-trout fi shing there and might catch their evening meal. But you may also simply enjoy the view and the thought that since 1894 the Elsehoved lighthouse has guided many a sailor safely past the point and into the passage between Langeland and Funen.

The tiny dormouse appears on the pages of many brochures on the natural wonders of South Funen. In practice, it does not appear very much, though. The little sleepy creature is shy and no bigger than 10 cm, nose to tail. It lives among other places in Ravnebjerg forest, which you will only get to if you make a little detour from the route. But you will pass through Brændeskov forest and who knows whether it is your lucky day? The reddish-golden little rodent takes to the trees during the summer so take a break and try to spot the little creature.

You are now rolling through the scenic Rantzausminde forest, named so as late as in 2010. Until then it had been called Poulinelund. The name change went hand in hand with a change from production forest to what is referred to as a forest of experiences. There are opportunities to play in the forest or at the natural outdoor playground, to cook over an open fi re and to sleep in shelters under the stars.