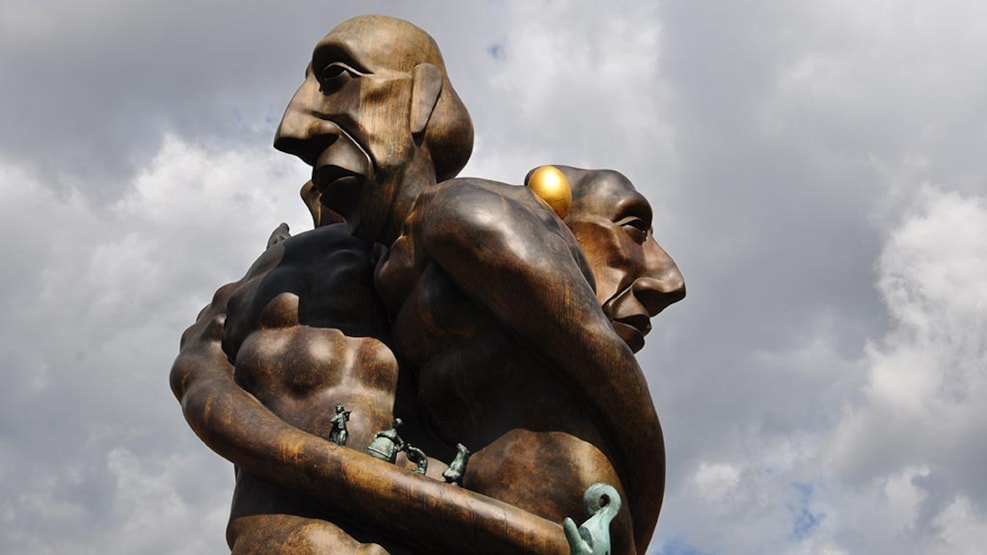 Three separate personas twisted together and then apart. This portrait of Hans Christian Andersen is as complex as the writer himself, which was the whole point of Nørgaard’s work.

The three figures are twisted together in a spiral to show an artist’s dream to contain the world, but also a conflicted personality – a mix of genius self-assurance, humility and a feeling of artistic failure. Characters from Andersen's many tales are placed around the sculpture, and all are surrounded by stairs in different directions and heights, underlining the complexity of the sculpture. In the centre, a small waterfall refers to nature and the eternal repetitions of life.

The sculpture is, typically for Nørgaard's work, created with a mix of many different materials. The three large figures are made in bronze, silver bronze and aluminium, all growing from a ceramic material. The foundation is made from Nordic Granit, as well as Granite from all over the world. The sculpture is eight meters high.

Fun fact: The sculpture is based on a figure Hans Christian Andersen created in the 1850s and was revealed on December 6th 2005, also the date that Andersen was appointed honorary citizen in 1867.

Bjørn Nørgaard (1947-) is a Danish multi-artist (sculpture, happenings, illustrator, ceramic artist). He is known for expressing himself through many different materials and techniques. In the 1960s he staged a couple of well-know art happenings such as “The Sacrifice of the Horse” and “Naked Female Christ”. Nørgaard is also the man behind the sepulchral monument in which HM Queen Margrethe II of Denmark will be laid to rest.