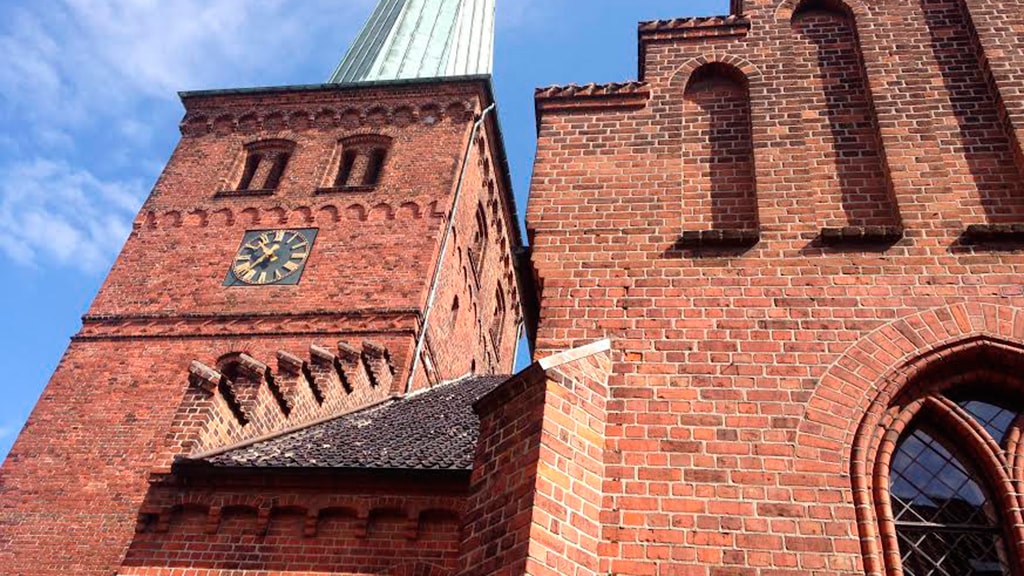 Queen Margrethe I. had Vor Frue Church built as a monument to the Kalmar-union. The church was inaugurated in 1428 and has been expanded and restored several times. Today it stands as a classical gothic church and a significant landmark in Nyborg. The latest addition is the alter cross, which is a tree of life cross, made for Vor Frue Church in 2011 by artist Maja Lisa Engelhardt.

Entrance: the small door on the south side of the church (outside church services).

Church of Our Lady – Nyborg

The Church of Our Lady was built between the years 1388 to 1428 and was consecrated on Whit-Sunday 1428. The four western transepts of the church are the oldest; at the beginning of the 15th century, these were closed off to the east by a north-south wall. By 1428, however, the church had been augmented with the two eastern transepts, the present chancel and, presumably, three chapels. Around the Reformation the three chapels on the south side were joined together with a common roof and in the 1550’s, King Christian III had the church extended with a full length extra aisle to the north. The great west tower was completed in 1589. The Church of Our Lady had five naves until 1870. In 1870-71 large sections of the aisles were removed under the direction of the architect Vilhelm Tvede and the church then assumed its present appearance.

The organ was built in 1973 by Poul-Gerhard Andersen, Copenhagen. It has 3 manuals, 37 stops and full mechanical action. In 2010 the organ had a Setzer combination system (an electronic memory for registers). Three stops are presumed to originate from the church’s first organ built by Hans Brebus in 1596 and four stops from the earlier 1830/1870 Demant organ. The organ has approximately 2.400 pipes.

The artist Maja Lisa Engelhardt and the Church of Our Lady

The Cross of the Tree of Life

In December 2011 The Church of Our Lady acquired an altar cross, created for the church by artist Maja Lisa Engelhardt (born 1956). The cross is cast in bronze gilded with 24 carat gold leaf. The altar cross is to be seen together with the Gothic crucifix (dating c. 1390) hanging in the chancel arch. In the carvings of the old crucifix sprouts from the Tree of Life can be seen. The altar cross is not a crucifix with a suffering Christ, but there are traces of his sufferings in the surface whereas the shape of the cross implies growth.

The base symbolises the dead tree from which the Cross of the Tree of Life (showing imprints of olive branches) grows almost organically.

The altar cross resembles a wooden cross which is dynamic in its expression. The gilding reflects the light in the church, symbolising the light emanating from Christ, reminding the beholder of the resurrection and life to come.

The cross was cast at Fonderia Mariani, Pietrasanta, Lucca, Italy

The Altar Window – “the window of resurrection”

The altar window is from 2015 – a glass mosaic also created by artist Maja Lisa Engelhardt.
The glass mosaic has been mounted in the frame of the old window stemming from the consecration of the church to Our Lady in 1428.

The motif of the resurrection in the Cross of the Tree of Life on the altar continues into the window, where black-painted trees with branches reach up and across the window pane. Through this network of branches the light in the iridescent glass makes the mosaic vibrate. Out of the darkness light streams as a holy presence.

Through its light and wonderful iridescence Maja Lisa Engelhardt’s window lets us experience something beyond rational explanation and understanding: the transcendence, the miracle of the resurrection.

The expression of “the window of resurrection” changes throughout the day, as well as in grey weather, sunshine and the different seasons. In daylight the branches are easy to see. In twilight the window turns blue, and when it is dark outside the branches “disappear” and all the pieces of the glass mosaic can now be seen with a mother-of-pearl iridescence, and in all the colours of the rainbow where the rays of light from the lamps are reflected in the glass.

The window was made in glazier Per Steen Hebsgaard’s workshop in Præstø.